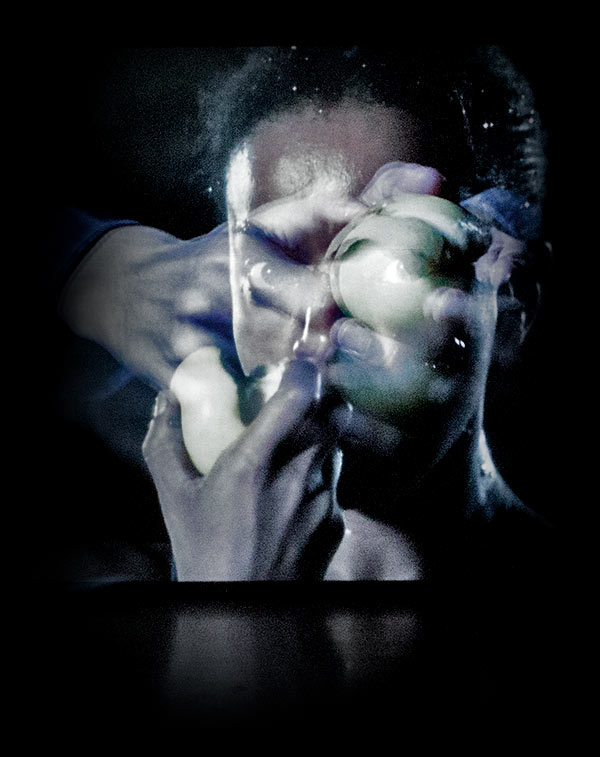 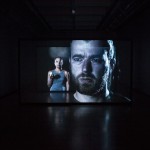 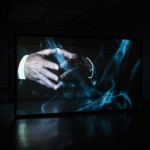 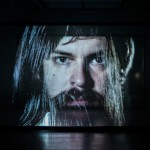 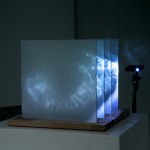 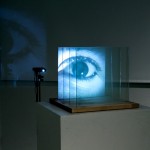 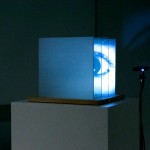 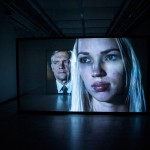 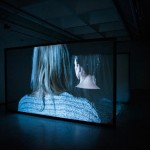 “In his exhibition Kalle Nio explores the spacial possibilities of moving image montage. Two streams of images in where the portrait-like images of the faces of people are filmed separately in a studio space are projected on a sculpture-like construction with a two-layered screen set-up. Illusion of interaction between the faces is born when the images are screened simultaneously. The artwork relates to the themes of distance and communication, which has been a subject of research for Nio also in his earlier works. One starting point for the exhibition were the writings of Lev Kuleshov (1899-1970), a Soviet film director and film theoretician. According to Kuleshov the face of the actor functions like a mask or a machine. It reflects overall environment without any specific expression, and it´s features can be said behaving like parts of the machine.
Kuleshov is most known about the experiment in where the images of different kinds of objects were edited following the image of the face. The audience complimented the skills of the actor even though the image of the face was always the same.

In a small box-shaped work an extra large close-up of an eye is layered on several polymer glass plates put in small distances between each other. Every now and then a stream of electricity is conducted into the plate turning the surfaces of the plates matte, shutting down the flow of the image through one glass plate to another. Seeing is fragile. The plates refer to the membranes inside the eye and the threats which are confronting it – in example a physical injury or opacity of the lens of the eye. Although Nio has filmed his own eye, in a tight close-up every eye becomes just “some eye”, like the french film director Jean Epstein has said. That a close-up detaches itself often from the environment has been noticed also by other film theorists, like Béla Balázs and the philosopher Gilles Deleuze. Nio´s work can remind the viewer also about the only film work directed by the writer Samuel Beckett, namely “Film” (1964), which starts with a close-up of an eye.

In the beginning of the 1950s the French avant-garde group of lettrists developed ideas for alternative film projections in a publication called Ion. One of the ideas was to show Carl Th. Dreyer´s movie Jeanne D´Arc through a fish tank. More than a decade later in the international movement of “expanded cinema” the moving images was linked with the new technologies of that time. The aim was to liberate the moving images from the conventions and to examine the audiovisual language in the dimension of the new technologies. In his exhibition Nio has created new tools of presentation, modificating the screen and the apparata of moving image into new kinds of sculptural entities. The exhibition shows that the area is still open to previously unknown variations.